Celebrating the 50th Anniversary of the Upper Clyde Shipbuilders’ Work in 1971-2. YES! YES! UCS! is the story of how two women workers on the fringes of an industry facing imminent closure are drawn into the monumental heroic battle to save the jobs of thousands, as well as the traditions, skills and good name of Scottish shipbuilding, and how their view of the of the world is changed forever.
Townsend Theatre Productions’ trademark gritty drama, audience interaction and live music from the early 1970s depict community solidarity, collective resistance and workers’ control. 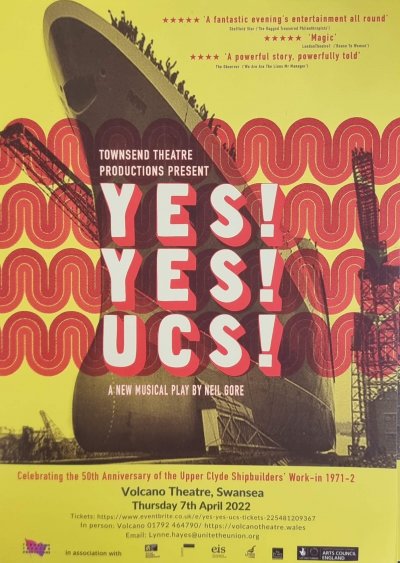 The Ragged Trousered Philantropists  *****  ‘A fantastic evening’s entertainment all round.’ (Sheffield Star)

We are the Lions Mr Manager ****  ‘A powerful story, powerfully told.’ (The Observer)